First, let’s get this out of the way:

[Updated a week later when I discovered that I signed up for other challenges and then promptly forgot.  Like the poetry one and the Page to Screen.  oh well.  🙂  ]

1.   Regarding the ongoing Jon Cusack’s Top Books Challenge hosted by moi. Didn’t read a damn thing towards this, this year. But I did accumulate a few of the titles for the in-house shelf. Still have yet to find (cuz I’m trying to find CHEAP, ie free, or at GoodWill, library sale or at bookmooch.com) Tropic of Cancer by Henry Miller and Naomi Klein’s The Shock Doctrine.

2. Europa Editions – I was supposed to read FOUR books but I managed THREE. Actually, I was very happy with my results on this.  It’s one I jumped into without really thinking when it was announced because I had two in house and someone sent me a book (Thanks JILL!) for the third option. And then I moved on.  Couldn’t decide what book to look for next and didn’t want to purchase any books.  On the other hand, I still have a few days left in the year. I seem to be doing bookish things like rather than real reading, though.

3. Read-alongs…  I failed to finish Ulysses with FizzyThoughts. Yea, whatever. I wanted to participate in the John Adams bio readalong at Wallace’s Unputdownables but got sidetracked when the library couldn’t seem to get part 2 on audio. I meant to BUY the darn book and just finish it in print. Then I forgot all about it.

4. In a post here back about a year ago, I said I would participate in the Aussie Author Challenge AND the Kiwi YA Challenge. Didn’t read a thing. SHAME on me. When I fail a challenge, I trip right over into the mud!  So to redeem myself a little, I do hope to concentrate on reading SOMETHING in these categories in 2012 but without any official signing-upness.

5.  That same post also declared my tippy-top reading goals to be slight but powerful and I called it the Personal CARE Challenge (get it? ‘care’?).  I was to read THREE, only 3 books and I accomplished about 75%.

I was to read a book by Rosy Thornton – I did and I LOVED it:  The Tapestry of Love.  Plus, I know that my enthusiasm for the book, which seemed to hit my perfect mood when I read it for a lovely experience, inspired a few of my goodreads friends to acquire the book and they loved it, too.  I’m so happy and I look forward to experiencing more Rosy in the future.

I managed to read Tim O’Brien’s The Things They Carried and was quite struck by it’s simple power. Very effective collection of short stories. I convinced my husband to read it – I don’t want this to sound bad, but it was his one fiction read of the year.  He allows himself such. He thought it ‘ok’. My mom, too, didn’t seem to think it was as good as I did.  Say laveee. (I have no idea how to spell that…) (but I do have powers to look it up in google:  c’est la vie; means ‘such is life.’)

And finally, the 3rd book I said I wanted to read this 2011 was my D.H.Lawrence collection Erotic Works and as much as I did enjoy what seemed like many many pages – egads, is it DEEEEEEP.    I put the book somewhere and have misplaced it.  [glances at bookshelf, confirms ‘nope – don’t see it.]  I read it almost too cerebrally – like “OOoooo!  must include this in blog post!  blah blah blah”.  I didn’t finish anything but the poems. Sigh. But I did read some which is how I arrived at a 75% completion for reading 2 out of 3 books. Few of you would wonder how I got 75% I’m sure. You won’t do the math anyway!

Plus I got extra credit points (so what if it is ME giving myself extra credit?!) because my post says I want to read something by Tom Hardy and I did!   Tess of the D’Urbervilles!  I just never got around to reviewing it.  I’m keeping the points.  *glare* 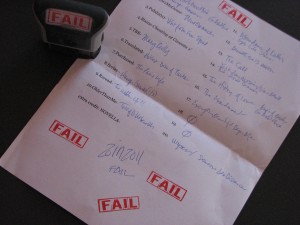 Now I know what the FAIL stamp* is for.

I never got around to reviewing any of the chapters I did read of Ulysess.  I never got around to reviewing True Grit.  I didn’t do that hot at read-book-watch-flick this year, either. I didn’t see very many movies in 2011 and am going to cancel Netflix.  Something about that feels like ‘end of an era’ nostalgia.  I used to love movies and now, I’m just not as interested.

Welcome! I invite you to comment. If for some reason commenting is troublesome, pls send email to BkClubCare [at] Gmail Cancel reply